Why is it so hard to pin down Nobility?

I was reflecting on the notion of human nobility, trying to think of individuals who I consider “noble” – women in particular. The first person that came to mind was Mother Teresa, but then I got stuck and had to think! This made me wonder why it doesn’t come easy to identify noble human beings. Is it because there is a lack of people who act with nobility? Maybe elitist notions of nobility (i.e. queens, princesses etc.) get in the way? My conclusion is that we lack the deeper understanding and maybe some role models and examples by which to recognize human nobility.

I did some reading and research and a picture began to emerge. Spiritual traditions tend to acknowledge fundamental nobility in human beings, though some scientific traditions disagree. I for one, side with the spiritual traditions and believe that all humans are essentially noble. I see it this way because I see in myself and others the capacity to elevate ourselves mentally, emotionally, physically and spiritually to do and see the good in ourselves and in others.

Mental nobility is managing our motives. The purity of the intent with which we do things is distinct from the outcome of our actions. Our WHY is as important if not more important than our  HOW. Laurence J. Peter for example speaks of mental nobility, in direct correlation to happiness. He says that “real, constructive mental power lies in the creative thought that shapes your destiny, and your hour-by-hour mental conduct produces power for change in your life. Develop a train of thought on which to ride. The nobility of your life as well as your happiness depends on the direction in which that train of thought is going”. 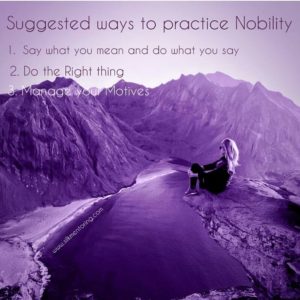 Emotional nobility is about vulnerability and truthfulness. We share with the world who we truly are. In the words of Dr. Suess, “Be who you are and say what you feel, because those who mind don’t matter and those who matter don’t mind.”  Nobility also relates to other emotional qualities such as authenticity, integrity, vulnerability and uprightness. In her book Daring Greatly, Brene Brown says “vulnerability sounds like truth and feels like courage. Truth and courage aren’t always comfortable, but they’re never weakness.”

Physical nobility is about the dignity of the human form! It is a universal idea to treat all human beings as deserving of everything we are deserving of. An example that comes to mind is the Universal Declaration of Human Rights, which states that we are born free and equal in dignity and right (art. 1) and that there should be no distinctions of any kind between human beings (art 2). These are essentially versions of the Golden Rule which calls us to treat others as we would like to be treated and calls us to practice nobility on an interpersonal level.

Spiritual nobility might be the hardest to describe and understand. There are of course the various Founders or the world’s spiritual traditions, the saints and sages, but those exemplars appear hard to follow in daily life. So maybe it is about starting simple. When I uplift myself and try to practice being noble with those who cross my path, I simultaneously experience intense emotions, which cover opposite ends of a spectrum, such as happiness and pain, or pride and humility. These experiences, reveal the “fullness” of my life to me, and help me connect with the depth of others. 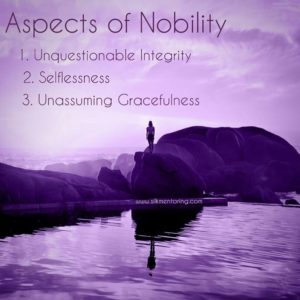 So here are my take-aways (for now!) about nobility. First of all it covers all aspect of who we are, the mental, emotional, physical and spiritual person. And some way in which we might reinforce our noble character could include the following;

No comments to show.